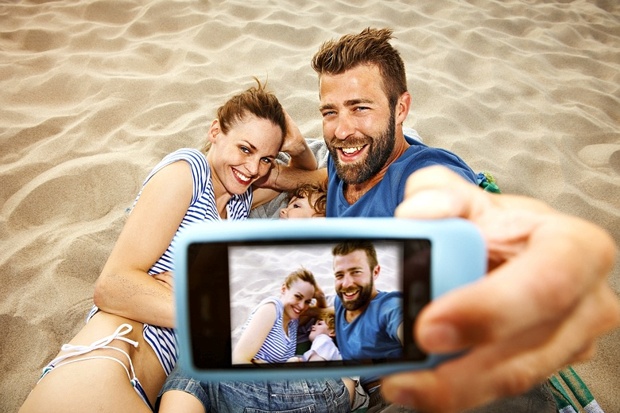 Millennials (those born after 1980) are having children. Bringing them up is all about individuality and self-expression

“They call us the slash/slash generation,” says Alex Higgs, 31. “We don’t just have one job or career.” Alex herself is a “blogger/social media manager/trend forecaster/mother”. She and fire-fighter husband, Joel, moved from London to Cambridge to have their family. Daughter Coco, nearly three, loves fire engines (naturally), attends a forest-school-style nursery and, while expected to “ask nicely and be gentle”, is treated as an equal. The Higgs’ parenting approach is “inclusive — now it’s all about tearing up the rulebook and encouraging individuality”.

Welcome to the typical lifestyle of the middle-class millenial parent. The millennial generation — those twenty and thirtysomethings born between 1980 and the late 90s — has come of age; is having kids. This vast cohort, which comprises 23 per cent of the UK population, reached adulthood during a time of economic crisis, globalisation and technological advancement. Consequently their attitudes and behaviours are unique; they parent differently from ye olde fortysomethings — the Generation Xers, born between 1965-79 — still hothousing and helicoptering, ever fixated with house prices and A*s.

Time magazine recently described millennial parents as “marked by their optimism” with “faith in progress, equality and Google”. Their most precious values are “individuality and self-expression”. They favour “access not ownership” according to Goldman Sachs; and as a “renter generation” are less materialistic. Creativity is valued over wealth (fortunate, considering that most young people expecting a lavish lifestyle these days are likely to be disappointed). They also smoke less, eat more healthily, exercise more. A 2010 Pew Research survey found that 52 per cent believe being a good parent is “one of the most important things” in life.

Alex, who recalls that if her parents had friends over, she was “upstairs in my bedroom, keeping myself to myself”, is proud that Coco is “involved in our life”. She says, “Coco has always been encouraged to express herself — maybe a bit too much. It will serve her well in later life but it doesn’t always make parenting easy. You’re nurturing this free, independent creature, and she expects to be free and independent all the time.” Millennials, noted Time, are “responsive, less directorial” parents. They’re unlikely to roar “because I say so!” (Although their kids are not yet teens, so good luck with that).

Alex and husband Joel grow vegetables and own chickens, “so Coco learnt early where eggs come from”, says Alex. “We try not to have dairy. We buy organic.” Alex co-writes a parenting and lifestyle blog Bone White China, sharing recipes such as beetroot brownies, and paprika kale chips. But while she cheerfully admits that “oversharing has its place”, she’s wary of posting “too much of our private lives. I don’t want to exploit my offspring”. This generation understands the digital landscape: knows the difference between “show reels”, and “the underside” of life.

Yet millennials have been harshly judged. Dr Tomas Chamorro-Premuzic, professor of business psychology at UCL, says the data on what some psychologists call “Generation Me” shows that “narcissism is rising, millennials are more self-entitled and deluded on average than other generations”. But doesn’t every ageing generation think the younger lot are selfish and full of themselves? Certainly, millennials are self-focused — a Time poll (conducted by SurveyMonkey) found that 46 per cent own up to posting a picture of their baby either in the womb or less than a day old. They don’t call themselves digitally savvy (passé I’m afraid); connection is instinctive.

Another expert noted, in Psychology Today, “this is not a deferential generation”. It doesn’t need to be. Former “urbanite” Lucy Aitken Read, 32, and husband Tim, quit their south London terrace last month to live in a solar-powered yurt in New Zealand, with daughters Ramona, 4, and Juno, 2. A recent post on Lucy’s blog, lulastic.co.uk, entitled “10 habits that infringe on the rights of children” (eg, wiping their nose in public without asking) raised cheers and hackles in equal measure.

As Lucy, also a Channel Mum vlogger, says: “Too much information can undermine you, but it can also give you a confidence to parent the way you want. I have access to a bunch of people around the world who can give me advice, tell me I’m doing the right thing when I’m co-sleeping or extended breastfeeding.”

She believes the millennials’ determination to raise their children as equals stems from a desire for “a more empathetic society”. She says, “It starts in the home. I guide my children, but I learn from them too. If there’s conflict, we’ll sit down and say, ‘what are everybody’s ideas?’ Sometimes my four-year-old will have the perfect solution.” She adds, “People are so vitriolic towards parents trying to do things differently: they see children being part of a family decision-making process, and think, ‘I didn’t get that when I was a kid!’ People feel affronted because it’s as if our generation is saying they did it wrong.”

Learning and behaviour specialist Noël Janis-Norton, founder of the Calmer, Easier, Happier Parenting Centre, in London, approves of “listening and including”, but disagrees with granting children an equal voice. The adults “are supposed to be in charge. A home isn’t a democracy. Adults have more wisdom, experience, maturity. Children are very good at knowing what they want. But parents should focus on what children need.”

Janis-Norton adds, “Unhappy is a fairly permanent state, where you’re not getting what you need. Upset is a transitory state where you’re not getting what you want. Most children are upset when they don’t get what they want. But they’re not unhappy.” She says, “I’ve noticed millennial parents have a willingness to negotiate.” Consequently, they’re always negotiating with their kids. But “it’s reassuring, and good for children’s mental health to have clear rules and expectations and routines”. Otherwise, they can become anxious “not to mention spoilt”.

However, Janis-Norton applauds the can-do attitude of these parents, who regard children as hardy, portable and, if the world doesn’t fit their needs, mould it to the desired shape. Graphic designer Jenny Scott, 33, mother of Sonny, 5, and Jasmine, 10 months, founded creative network Mothers Meeting (MM) — and authored How to Be a Hip Mama Without Losing Your Cool — after attending a postnatal group and finding that “everything mum-related was baby pink and twee — obsessed with nappies and nipple cream”.

Her generation, says Scott, is less obsessed with money than “fulfilling ambitions, making the most of what you’ve got — it’s all about experiences”. MM organises gallery visits, business events: children are welcome but the focus is the adults. Of course there’s fear, anxiety, stress, but also a zeal to overcome it. Everything is possible. As Scott notes, “If you’ve got an iPhone, you can run a business from your bed.”

Alex runs the Cambridge branch of MM and shares Scott’s gung-ho attitude. Coco attended Latitude and, aged six months, another festival called Wood. Her father Joel says, “My childhood was amazing but slightly sheltered. I want to get out there with my children. It doesn’t come without its headaches, but when it pays off it’s worth it. And, if it all goes terribly wrong, we can just come home.” He adds, “We were always very social, so we thought, let’s just keep doing what we love, and involve the whole family.”

Joel, a fire-fighter, works four days on, four days off, and, typical of a millennial, is a “very hands-on” father. It’s the father’s presence, over a vast salary, that this generation values. He says, “I want to do well for my family. That doesn’t mean success as people traditionally see it. It’s about keeping a keen interest in the world, trying to create a good moral base for my children, and having fun.” He adds, “I’m definitely not an alpha male, but I have a traditional job. I don’t fit myself into any one category. I like the full spectrum of being a man.”

This optimism, idealism, and sense of personal responsibility pervades. Emma Ross, 30, from north London, works part-time for Google, and is a Channel Mum vlogger (youtube.com/mamalina). She says that when her son Jack, now one and a half, “was six-months old we went backpacking around South Africa. We stayed in hostels, he saw the world with us”. At home, she grows “carrots, lettuce and corn”. She makes “crayons and Play-Doh, and my own baby bath products” (no chemicals), and uses non-disposable nappies; “The waste from disposable nappies is incredible,” she says. “If I can do a little bit.”

There’s also a devout belief in gender neutral toys (meaning, if your girl — or boy — favours tutus, so be it.) Alex Higgs says, “I feel very strongly against gender stereotypes.” Susan Muirhead, 34, from Troon in Ayrshire, mother of twins, Layla and Quinn, nearly four, says, “Last Halloween my girls dressed up as Batman and Robin. I shop in the boys’ section as much as I do from the girls. Once, Layla said, ‘that’s for boys’. My husband and I said, “that’s not true, Layla — it’s for anyone who likes it’.”

Susan returned to her job as a live-music event-planner when the girls were six months, and though she’s currently a full-time mother, she says, “I want the girls to understand that women can work, have families, and nobody needs to suffer. They should strive to have everything they want in life, because it can all be juggled, it can all be achieved.” She adds, “If you explain the truth, children will trust you — and I always want my girls to trust me.”

Janis-Norton, however, is against the constant explaining: “When you explain to a child why they have to do something, they don’t say ‘Oh, now I understand so I’ll do it’. They’re not that interested in our grown-up reasons.” She adds, “Most children know why they’re supposed to go to bed this side of midnight, why they’re supposed to hold your hand when you cross the road, why they’re not to throw food. So when they say ‘why?’ rarely is it a genuine request for information. Mostly it’s a diversionary ploy.”

Muirhead, thoughtful and intuitive, disagrees. She says, “If one of the girls says ‘Why?’ my parents will say, ‘Because I say so, and I’m in charge.’ My husband and I have always said, ‘Well, here’s the reason why,’ and we take the time to explain, because we firmly believe that this will help them be better, more patient people, who question and analyse.”

The so-called Me Generation really isn’t all about Kim Kardashian and Tinder. Unlike Gen-Xers, still ferrying our stressed-out darlings from mandarin to capoeira, millennials dream of giving their kids freedom, a love of nature and decent values. The future may be bright after all.