Battle of the baby foods

To puree or not to puree? Shop-bought or home-made? Plum Baby or iced cubes? These days, feeding your baby is a social minefield 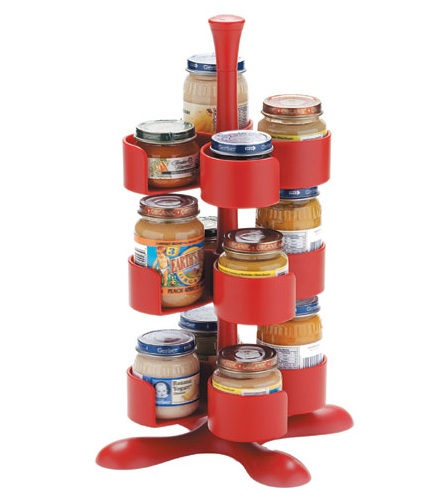 If the cartoonist HM Bateman were still with us today, he would undoubtedly have turned his caustic eye to modern motherhood. What a rich vein of satire there is to be explored: the woman who breast-fed on the Tube; the woman who used disposable nappies at a National Childbirth Trust tea party…

The question of baby feeding is perhaps the most emotive of all, as I saw last week. Admittedly, an organic cafe in Stoke Newington is not the wisest place to be seen with Cow & Gate, but did the mother who opened a jar of baby food in Fresh & Wild really deserve the sharp intake of breath and disapproving stares?

Some parents insist that jarred baby food, with its pale-brown colour and uniform, caramelised taste, verges on gastronomic abuse; others declare that with nutritional standards laid down by the government, specially designed commercial baby food might be even healthier than homemade meals, as well as being safe, convenient and quick.

As if the debate wasn’t already complicated enough, a new group has emerged that believes puréed food, homemade or bought, is bad for babies. Aficionados of babyled weaning – led by Gill Rapley, deputy programme director of Unicef’s Baby Friendly Initiative – believe babies should be fed nothing but breast milk until they are six months old, then should be started on finger food to stop them becoming fussy eaters who reject anything lumpy.

Confused or not, one thing is certain: British mothers buy an awful lot of prepared baby food. The worldwide baby-food market has more than doubled in two years, increasing from £4.7 billion in 2003 to £10.5 billion in 2005. As a result, hundreds of yummy-mummy brands have sprung up to cater for the demand, and plenty of celebrities have jumped on the bandwagon.

Britney Spears, for instance, is such a fan of commercial baby food, she was eating her son’s organic baby biscuits during her second pregnancy. Victoria Beckham fed her offspring Babylicious, while Elizabeth Hurley announced her intention of retiring from acting to produce her own baby-food range. But making ready-prepared food taste good is not easy, says Annabel Karmel, whose recently launched Make Your Own range includes sauces to which home-cooked food can be added. “The sterilisation process for jars requires baby food to be heated to a high degree, and that destroys much of the taste.” she explains.

“I wouldn’t be seen dead with a jar,” scoffs the chef Adam Byatt, of the Clapham gastro-mecca Trinity. When his son Jack, now 3, was a baby, Byatt’s feeding technique was to blend anything he was eating and freeze it. “Now Jack is a phenomenally good eater,” he says. “In France last month, we shared a plate of oysters and snails. I’m sure that’s down to exposing him to those flavours from the beginning.”

As a father of six and the executive director of the Alliance for Natural Health, Dr Robert Verkerk is at the sharp end of the debate. His approach is pleasantly pragmatic. If he’s heading off on a long journey with his brood, even he snatches a packet of Plum Baby. “It’s head and shoulders above the rest in terms of nutrients,” he says. But in general, he says, homemade is best. “Nobody should use processed food as their baby’s primary source of nutrition, because it’s always going to give an insufficient diversity of flavour, nutrients and textures.” In fact, while experts may quibble about the relative green merits of washable v disposable nappies, it seems that there is a consensus on the superiority of home-cooked food to even the poshest bought baby cuisine.

WHAT YOUR CHOICE SAYS ABOUT YOU

Tupperware box of veg-based finger food (scrubbed home-grown carrots, organic broccoli spears). You are green-leaning, probably slightly older and believe in babyled weaning. Your People Tree jeans are covered in drooled apple chunks, as is your baby. Cost per mealExpensive, if you factor in all the food that’s fallen to the floor. Available fromAbel & Cole, which will deliver an Organic Baby Box of seasonal fruit and veg (containing baby favourites such as avocado, bananas, sweet potatoes and strawberries) for £10. Or dig it all out of your allotment.

Hipp Organic You are a young working mother with a job in the media and a wardrobe from Issa. You don’t know how to work your veg steamer – and who needs one, when jars contain vegetable, pork and apple roast dinner and chocolate blancmange? Cost per meal Hipp Organic Pasta Italienne with ham, about 70p. Available from Boots, Asda, Tesco, Sainsbury’s, Waitrose (pick it up on the way home from work).

Plum Baby You are an alpha mother. Your baby had fish oil added to its bottles of expressed breast milk. (You went back to work at the bank six weeks after giving birth, but you long-distance breast-fed for the recommended six months.) Now you allow the au pair to take Plum Baby pots on excursions because they contain quinoa and organic superfoods for maximum nutrition. Cost per mea lBeetroot and apple with artichoke, £1.99 for a two-pot pack. Available from Ocado, Waitrose, Sainsbury’s, Graig Farm Organics.

Cow & Gate You have neither the time nor the inclination to make your baby’s food, or to angst about organics. You may well have a Croydon face-lift and give your baby Ribena in its bottles. Cost per meal Cow & Gate Baby Balanced Sunday Lunch, about 70p. Available fromTesco, Asda, Somerfield, Morrisons, Boots, Sainsbury’s.

Heinz Mum’s Own You would like to feed your baby home-cooked meals, but somehow you never get round to it. Knowing that these recipes were created by other mums gives you a nice cosy feeling. Even so, you are riddled with guilt, live in the suburbs and work part time. Cost per meal Pasta with chicken, peach and peppers, about 65p. Available from Asda, Tesco, Morrisons, Sainsbury’s, Boots.

Babylicious You have a Chelsea tractor and got back into your Seven jeans two weeks after giving birth. You are also extremely busy – facials, shopping, lunch with the girls – so have no time to make your own baby food. Instead, you pass off Babylicious’s efforts as your own. Cost per meal Creamy salmon and broccoli mornay, and cod and vegetables, about £4 per pack of 20 frozen cubes. Available from Kitchen Monkey, Asda, Budgens, Ocado.

Annabel Karmel acolyte You are a full-time yummy mummy with groomed hair, a husband in property and a well-thumbed copy of Karmel’s Feeding Your Baby & Toddler cookbook on the bookshelf. You carry a bright plastic lunchbox that contains homemade mini pizzas, decorated to look like rabbits, and red pepper cut into star shapes. This is lunch as art. Cost per meal Huge, if you factor in the time you spend with pastry-cutters. Available from Any kitchen with a full-size Aga in it.