The only two things kids want to know about your job 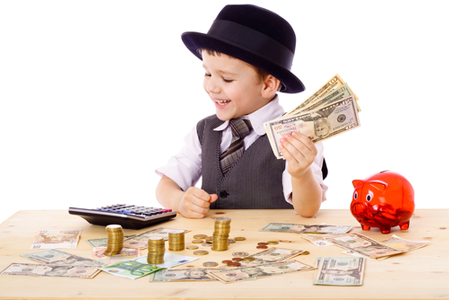 A new book on the subject claims, among other things, that our children ‘deserve’ to know how much we earn. I don’t buy it

It’s the cringe-making question that every parent dreads. It is usually delivered by nervous moppet, slightly flushed of face. And no, it’s not, “Where do babies come from?” It’s much worse than that. It is, “How much do you earn?”

For years my stock response to said question has been an affectionate hair ruffle and the word “Peanuts”, followed swiftly by, “Oh look, I think One Direction have just walked past our recycling bins!” But it transpires, according to a new scholarly tome on the subject of children and money, that this is entirely the wrong response, and, to put it bluntly, it’s time to get real with your kids about cash. Yep, in his magnificently titled new book, The Opposite of Spoiled: Raising Kids Who Are Grounded, Generous and Smart About Money, financial writer and New York Times columnist Ron Lieber claims, among other things, that our children “deserve” to know how much we earn. It’s part of a long-term strategy, he says, that begins when they’re as young as five years of age and includes the encouragement of part-time teenage employment (agree!) and the curtailing of excessive kiddie spending (also agree!), and will ultimately transform them into chilled-out financially-aware citizens who are incredibly responsible with money (huh?).

Me, I just don’t buy it (and probably can’t afford it). Money and earnings, and the prowess they imply, are difficult, volatile and divisive subjects for most adults. Who says that kids, who can elevate a minor playground spat over dirty trainers or ginger hair into sinister years of bullying and psychological torture, are better equipped to handle it? I have no idea, for instance, how much money any of my friends make, annually, but I can usually tell by the size of their houses and the spec of their cars whether they earn more or less than me (mostly more, as it happens, which is cool, and just inspires me to better things, he said, through gritted teeth). Yet why do kids suddenly deserve a detailed balance sheet, complete with VAT returns and a breakdown of quarterly trading figures?

And neither am I convinced that children really, deep down, want to know this stuff. It’s like sex. When they first ask about babies, they want some general ball-park material. They don’t want a checklist of your favourite positions and the time that you and Mamma did it all night long by switching back’n’forth from the kneeling wheelbarrow to the criss-cross applesauce. Equally, I’ll never forget the conversation I had with my son, then nine-years-old, who asked me, after months of reading football magazines and absorbing salary stats of the Premier League players therein, “How many millions do you make a year?” When I said, bluntly, “None”, his eyes widened and seemed to silently scream, “What?! I suppose it’s the bailiffs next!”

Or, more recently, at a school careers’ night, I was struck by a popular recurring question from the children I met: “Do you make loads of money and do you have to work long hours?” The answer, typically, was “No, and yes.” What the question told me was that children are interested in money, and they want to know how to make tonnes of it, but that they’re not ready, just yet, for the truth.

I am living the Clooney dream
They call it The Clooney Effect and, according to dating website Match.com, it describes the phenomenon where 87 per cent of men surveyed claimed, like Clooney (who married brainbox Amal Alamuddin), that they were seeking women who were cleverer than them. Well, I’m happy to report that I am living the Clooney dream. My wife is way smarter than me. And that’s not just sucking up. We studied in college together, took the same exams. She got a first. I got a 2:1. It’s fact. She’s smarter. Which, as Clooney knows, is kind of sexy too. It’s like I’ve married the teacher or a nuclear scientist from a Bond movie. But it’s also really annoying when you’re arguing. You will never win an argument with a woman smarter than you. You’re like, “Damn! Why have you already thought of everything before I’ve said it! This is rubbish! Where are the dumb women at?!”

The Pope: a one-man fight club
I love Pope Francis. He gets better, more earthy, and certainly more street every week. Last week he announced that it was OK to smack a naughty child. A couple of weeks before that he said that he’d punch any man who insulted his mother. And before that, again, he said that he’d give any corrupt donors to the Catholic Church a good kick up the arse. Turn the other cheek? Hell no! He’s basically a one-man papal fight club. And I can’t help but picture him, decked out in mitre, chasuble and cassock, bouncing lightly from side to side, shadow boxing through the Sistine Chapel, karate-chopping errant cardinals, doling out roundhouse kicks to disrespectful envoys (“You said what about my mother?”), and standing triumphantly over their fallen bodies while shouting, “How’d you like it now, sucka? You just got schooled, il Papa style!”