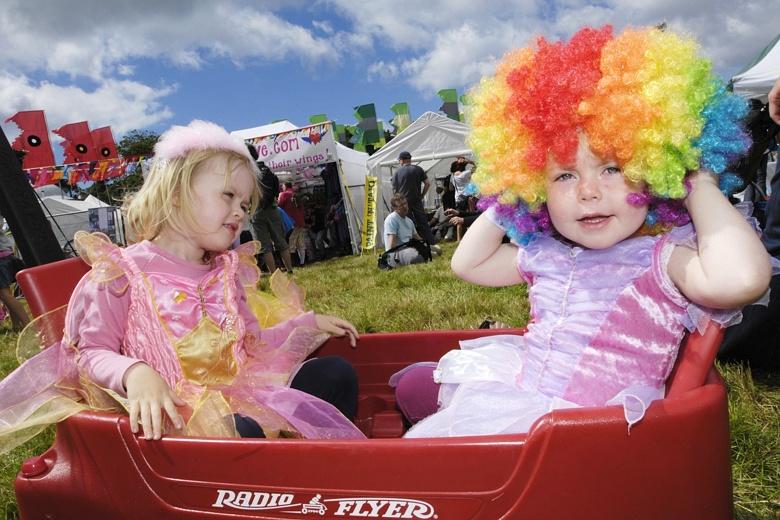 Port Eliot, Cornwall
Originally a literary festival in the grounds of a stately home near Saltash, Port Eliot has expanded to include music (this year Andrew Weatherall and the Doves), chefs, designers and performers as well as authors. Last year Kate Winslet popped up as a storyteller for children and Martin Scorcese has previously curated the film programme. For children, there is a market where they can set up stalls, a writing workshop, and Hullabaloo in the woods — with games, drama, music and treasure hunts. About 7,000 tickets are on sale.
Details Jul 24-27, adult weekend from £145, child from £70, under-7 free, porteliotfestival.com

Latitude, Suffolk
Voted best family festival in 2012, Latitude, near Southwold, is held around a lake and draws 35,000 people. The kids’ arena has everything from pond-dipping to star-gazing, and older children have an assault course. Bands include Damon Albarn and Haim.
Details Jul 17-20, adult weekend from £190.50, teenager from £140.50, child from £5, latitudefestival.com

Womad, Wilts
Celebrating music (Alice Russell and Fat Freddy’s Drop), arts and dance, Womad, in Charlton Park, near Malmesbury, has seven stages including the Taste the World stage and SanFrans disco bar. The World of Kids is said to be the largest children’s area of any festival and has workshops for building colourful items for the children’s procession. There are also graffiti walls, circus skills workshops, a story tepee, musical mazes and bug hunting in the long grass.
Details Jul 24-27, adult weekend £160, teenager from £80, under-13 free, womad.org

Larmer Tree, Wilts/Dorset border
This intimate music and comedy festival near Salisbury has a theme of “the orchestra”. With six stages and more than 80 acts (including Tom Jones and Squeeze) performing for 4,000 guests, there’s a lot on offer. Everyone is encouraged to make a costume for the carnival. For children, there are capoeira demonstrations, puppet theatre, bread-making workshops and African drumming lessons, while the youth zone has Bollywood dancing lessons, jamming sessions and football and cricket. There are words workshops in the Lost Wood.
Details Jul 16-20, adult 3-day from £150, teenager from £95, child from £50, larmertreefestival.co.uk

Beautiful Days, Devon
Started by the Levellers, this music festival (folk, roots and punk rock) in Escot Park, Ottery St Mary, has a kids’ area in the middle of the arena — so you can enjoy the headline acts while being a good parent. The punky, hippy nature of the festival leads to a chilled atmosphere. The children’s area has theatre, crafts, dressing-up, a circus, story-telling, music workshops and family-friendly performances. There are wake-up sessions from early on in the day — if you haven’t had too many pub-priced drinks the night before. The line-up will be released this week, but last year included Sinead O’Connor and Primal Scream.
Details Aug 15-17, adult tickets from £130, child £5-£60,beautifuldays.org

Cornbury, Oxfordshire
Perhaps the opposite of a chilled-out hippy festival, Cornbury is unashamedly well-to-do. The event, near Woodstock, calls itself “a dynamic summer festival disguised as a country fayre”. The children’s zone is something else: there’s yoga, Punch and Judy and storytelling, followed by a ventriloquist show, pirate pantomime, stilt-walking workshops, African dance and parachute games. Marc Almond and Suzanne Vega are playing.
Details Jul 4-6, adult weekend £200, child from £35,cornburyfestival.com

Green Man, Powys
Hippy festivalgoers with kids love Green Man near Crickhowell — not least because it has one-week camping tickets. These mean you can arrive early for a proper holiday, and the festival begins just as you run out of ways to entertain the children. Inside, it has the lovely sounding Einstein’s Garden, Babbling Tongues and Nature Nurture. For adults there are hundreds of folky acts in the natural amphitheatre, including Poliça and Beirut; for children there are eco workshops (bat walks, juggling workshops, forest cooking), hip-hop and African dance, trampolines, quad biking, dragon parades and photography classes. For adults, Beirut and Daughter are playing.
Details Aug 14-17, adult weekend from £159, teenager from £85, child from £5, greenman.net

Wychwood, Glos
For creative and musically minded children, laid-back Wychwood at Cheltenham racecourse has an emphasis on making things. There are workshops including painting, hat-making, recycling old records and crochet; an interactive venue with traditional and contemporary dance, a theatrical percussion group and much more. When you’re ready to relax, there is a family theatre with puppets, storytelling, magic and music. The piece de resistance? A Bubble Show with Samsam the BubbleMan — Sir Michael Caine said that he “blew us away with his bubbles”. The Stranglers and Boomtown Rats play.
Details May 30-Jun 1, adult weekend £125, child £60, under-10 £20, under-5 free, wychwoodfestival.com

Sunrise, near Bristol
Previous winner of the Green Parent Magazine Best Festival Award, and voted the most eco-friendly festival in the UK, Sunrise: All Good Things is a safe and community-led haven for children, with no commercialisation and powered entirely by sustainable energy. The kids’ area has a helter-skelter and other fairground rides and there’s a skate ramp for teenagers. Describing itself as a “festival micro-nation”, Sunrise will be in “a new secret location” outside Bristol. There’s a healing field and sacred heart space with shamanic dancing and workshops for kids.
Details May 29-Jun 1, adult weekend from £101.50, child £38, car pass £21.50, sunrisefestivals.co.uk

Wilderness, Oxfordshire
Row on the lake, go swimming, climb trees — Wilderness is a family-friendly paradise near Charlbury, hosting 15,000 people each year. Children accompany the postman to deliver mail to friends, and there are group dance sessions, music, magic and games, as well as horse riding and archery. Mortimer Nannies are on hand should adults wish to head to the lakeside Scandi-style spa, which serves champagne. The food line-up is taken as seriously as the music, with Yotam Ottolenghi, J. Sheekey and Mark Hix. Musically, watch for London Grammar, Metronomy and Burt Bacharach.
Details Aug 7-10, adult weekend £151.50, 11-17 £78.50, under-10 £5, wildernessfestival.com

Standon Calling, Herts
With just 5,000 tickets available, Standon Calling is set in the grounds of a 16th-century manor house and remains intimate. It focuses on breakthrough artists — previous headliners have included Mumford & Sons and Florence and the Machine. During the day, adults laze around the lake and swim while children head to the craft area and make play dough murals or take beatboxing classes, listen to stories, watch Maurice’s reggae nursery rhymes or try interactive theatre. This year’s musical line-up includes Frank Turner and Maximo Park.
Details Aug 1-3, adult weekend from £119, child from £5, standon-calling.com

Shambala, Northants
This diverse festival is in a secret location and has a line-up of rock, pop, folk and culture — the programme is released later this month. The children’s field has a creche as well as workshops, trampolines, a puppet tent, and music-making areas. In the middle of the main festival area is a family yurt which acts as a chill-out zone for youngsters and parents, with tea, space to play and bedtime stories. There is separate camping for young families with its own entertainment and campfire, and “bush camping” for 8-12 year olds so that you can send them off to learn survival skills.
Details Aug 21-24, adult weekend from £99, teenager from £79, child from £35, shambalafestival.org

Deer Shed, N Yorks
“Kids are not second-class citizens at Deer Shed”, the organiser promises. From the minute you arrive at Baldersby Park, Topcliffe, the children are catered for — and activities will keep them busy while you pitch the tent. There is a cardboard city, rounders , eight tonnes of play sand and a soft play area.
Details Jul 25-27, adult weekend from £99, child from £30,deershedfestival.com

Just So Festival, Cheshire
This family arts festival is near Congleton is designed to encourage creativity and imagination. The “Little Wonder” area has acrobatics and an Alice in Wonderland area with physical theatre; there is also a fairy-lit woodland with arts and crafts, a book tent, shadow theatre and a magical musical fairground.
Details Aug 15-17, adult weekend from £100, child from £45,justsofestival.org.uk

Wild Heart Gathering, Sussex
Calling itself “A Celebration of the Wild, Music and the Arts”, Wild Heart is set in beautiful grounds with a lake, woodland and meadows near Royal Tunbridge Wells. There is music, debates, wild walks, bushcraft, yoga, dancing, meditation and poetry. Children can also learn about beekeeping and stone-carving, and go foraging in the woods, which will be decorated with fairy lights and bunting. The festival is tiny with just 1,000 tickets — a large part of its charm.
Details May 23-26, adult weekend £80, child £20,wildheartgathering.com

Eden Festival, Scotland
This boutique festival is in Raehills Meadows near Lockerbie. It has nine stages, a children’s arena, circus tent, drive-in cinema, comedy and cabaret, workshops and a host of performers and games leaders. The kids’ area has a craft marquee and a forest skills area. There are also treasure hunts, an end-of-festival kids’ parade, parachute games and yoga sessions. The line-up is announced this Wednesday.
Details Jun 13-15, adult weekend from £95, teenager from £75, 12 and under free, edenfestival.co.uk

End of the Road, Wilts/Dorset border
Headlined this year by Wild Beasts and the Flaming Lips, End of the Road is held in Larmer Tree Gardens near Salisbury and has mini-stages for up-and-coming bands. About 14,000 tickets are on sale and events include a John Cooper Clarke recital, comedy stage, morning qigong and much more. The woodland library has books for children to borrow and return next year and there are dedicated kids’ areas with activities in the forest as well as an enormous adventure playground.
Details Aug 29-31, adult weekend from £170, teenager £130, child 6-12 £80, child 3-5 £40 endoftheroadfestival.com